Between now and 2020 we will lose over four million women worldwide to ovarian cancer. This is the hard reality of the future of this lethal disease.

Rather, that is unless we take urgent action now.

Current estimates state that each year over 300,000 women globally are diagnosed with ovarian cancer. That figure is set to rise significantly – by almost 50% over the next twenty years to almost half a million.  As it stands right now, well over half will die within five years of their diagnosis making this disease the one of the deadliest of all women’s cancers.

These are shocking statistics, but they don’t really quantify the true tragedy of this loss.  These are not only our mothers, sisters, cousins, and friends, but they are also business owners, athletes, scientists, teachers, doctors, and more. In just 18 years four million women and the vital contributions they make to society will be gone.

Distressingly, we are also increasingly aware that for many women geographic, financial, and social circumstances stand between them and access to best possible care.

In a recent exercise, the World Ovarian Cancer Coalition looked at access to ovarian cancer treatment across thirteen countries, from low- to high-income. This review of availability, accessibility, and affordability covered a core set of standard ovarian cancer treatments. With the exception of PARP inhibitors, the recent, break-through treatment for some women with a genetic mutation or tumour characteristics all of the other treatments included are currently on the WHO’s Essential Medicines List (EML).

However, the review’s most concerning conclusion was that the women least able to afford treatment were the ones most likely to have to pay out-of-pocket. Women in higher-income countries are more likely to have access to state or private coverage, women in low- and middle-income settings are more likely to pay for more than half of the core treatments themselves – even if they are approved for use and available in their country.  It is worth noting that 70% of the woman who are diagnosed with ovarian cancer each year live in lower income countries.

More generally, low global awareness of the disease, on the part of health care professionals as well as women, hampers a more rapid diagnosis – with delays in initial investigations, testing, referrals to specialist surgery and care all standing in the way of potentially better outcomes.

Even where there is awareness, healthcare systems frequently lack the resources and expertise to help women. Many lower income countries also suffer from a pronounced lack of specialist cancer physicians and support services, all hindering women’s chance of receiving the best possible care.

On a positive note, there is actually a lot to feel excited about in relation to new developments in the understanding of ovarian cancer and treating it more effectively. But this will only make a difference if we take meaningful steps today on behalf of the millions of women we stand to lose in the very near future. Our Global Ovarian Cancer Charter sets out the following six key areas that require action.

Women deserve better. The time for us to act is now to close the care gap. Whoever and wherever you are, please join us  so no woman is left behind. 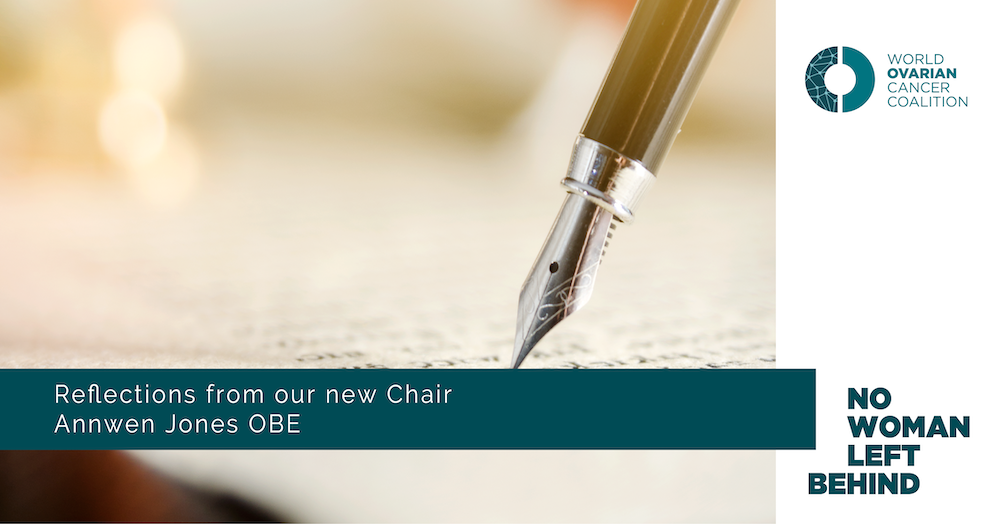 This time of year is special for many of us as it embodies the importance of celebrating what is, reflecting on what was, and looking ahead to what can be.

As I take up my new role as Chair of World Ovarian Cancer Coalition Board, I am especially grateful to be part of this outstanding community of global advocates working tirelessly to improve survival and quality of life for every woman diagnosed with ovarian cancer – wherever she may live.

I am also proud of what this Coalition has achieved in the five short years since our inception. From a humble base of 30 supporting partner organizations at the outset, we now work with almost 200 patient advocacy organizations around the world.

The Every Woman Study™️, launched in 2018, has provided us with enormous insight, backed-up by high quality evidence, about the experiences of women living with a diagnosis of ovarian cancer.  Through this work we have been able to develop a rallying call for action in the form of our Global Ovarian Cancer Charter.

I am also proud of the major strategic partnerships we have developed along the way; including with the International Gynecologic Cancer Society (IGCS), with whom we are partnering on the Every Woman Study™️: Low- and Middle-Income Edition that will be undertaken next year in close to 30 countries. These are big achievements that belong to us all.

As we face the New Year, I am ever mindful that despite our accomplishments, there is still so much more work to be done. Ovarian cancer incidence and mortality are on course to continue to rise, the gap between high- and low-resource settings is ever widening, and although we welcome the most recent advances, there are still many women with extremely limited treatment options.

As Chair, I am committed to ensuring that the Coalition provides global leadership and insight and that no woman with ovarian cancer is left behind.  We will continue to support our outstanding partner organizations so that they can be as impactful as possible within their own settings and will foster and support the development of advocacy organizations where they currently do not exist. Through the Every Woman Study™️: Low- and Middle-Income Edition and our ambitious Ovarian Cancer Futures project to be launched in 2022, we will provide even more strategic evidence to back our call for transformational change in ovarian cancer outcomes and the actions required to achieve this. Most importantly, we will work with collaborators and partners who share our vision and passion and who also believe that ovarian cancer must be recognised as a global priority with a global action plan put in place.

I am hugely indebted to my fellow Board members, including our new Vice-Chairs, Robin Cohen, CEO of the Sandy Rollman Ovarian Cancer Foundation and Jane Hill, CEO of Ovarian Cancer Australia.  Our most recent appointments to the Board, Runcie C.W. Chidebe from Nigeria and Rafe Sadnan Adel from Bangladesh bring to the table a genuinely global perspective and help round out our expanded and diversified Board.

We truly owe a debt of gratitude to our outgoing Chair, Elisabeth Baugh, for her leadership over these past five years. It has been an honour and privilege to have worked alongside her.

On behalf of the World Ovarian Cancer Coalition thank you for everything you do and your unwavering commitment to all those affected by ovarian cancer.  We wish you a prosperous and safe 2022.